The Pursuit of Perfection Creates Anxiety & Stress for Students

I am typically not one to watch intellectual competitions in my spare time, especially anything more intense than Family Feud. However, one caught my attention as I flipped through channels. The show was called Child Genius. Young children answering questions about crazy subjects and spelling words that I didn’t even know existed. I was hooked. 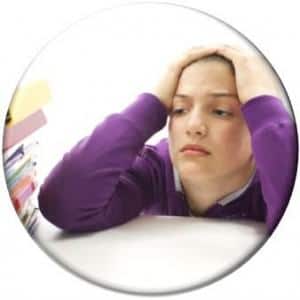 The pressure for perfection can be overwhelming.

As I watched week to week, the competition naturally grew more intense. Kids with the lowest score were sent home after each round of competition. Two contenders stuck out to me the most. A ten-year-old named Graham, and an eleven-year-old named Ryan.

They stood out, not because of how fast they could answer the questions, or how intense their rivalry was. It was how different the mindsets were between Ryan and his family, and Graham and his family.

Both students were equal on paper. Ryan was studying above grade level, and his IQ tested in the 99.9% percentile at age 5. Graham was also studying multiple grade levels above average and also tested at the top of the charts in IQ.

So, why did Ryan leave the competition weeks before Graham (who went on to place 3rd in the last round)?

Ryan’s family demonstrated why student stress and anxiety happens to a tee. The pressure they put on him appeared unbearable. Even when he won a round of competition, if he made a mistake his parents we’re there right after to tell him, “you knew that, how could you mess that up”. These kind of statements came immediately following any small mistake. After each round of play, Ryan was back studying.

Graham and his family had an extremely different mindset. It ultimately led to his greater success. Graham’s family would cheer in the audience or give him a big ‘thumbs up’ when he answered a question right. When he was wrong, he got a “oh well, you still did great.”

During week long breaks in the competition, Graham would go home to see his family. His parents even threw a party for him and his friends to celebrate how far he had made it. Ryan’s family booked a room in the hotel where the competition was held, and he continued to study in that room all week due to his parents’ lack of confidence in his prior performances.

It was evident to everyone watching that Ryan was stressed and anxious. The constant studying, mixed with the pressure, mixed with never feeling smart or good enough had gotten to him. Not only was he eliminated from the competition, but I had to wonder if there were repercussions from the extreme level of stress and anxiety.

It is easy to want what is best for the child. Every parent and teacher does. However, it is important to balance that desire with positivity.

Graham went on to take 3rd place with a smile on his face. His supporters never stopped encouraging him. He did not appear to have the anxiety like the other competitors.

Student stress and mindset (and the mindset of their parents and teachers) play the biggest roles in a student’s happiness in life.

At SOAR® we believe students who receive celebratory affirmation fair better than the student working under pressure and criticism. We stress a strengths-based approach for students.

It is exactly why we open our curriculum with a positive question, “How are you smart?”  This first chapter in the book focuses on Howard Gardner’s Multiple Intelligences and is designed to build on students’ strengths.